In Syracuse, is Green the New Orange?

Well...at the end of the day nothing will take the Orange out of Syracuse, especially when it comes to The Syracuse Orange. That said, Syracuse has blazed a particularly impressive “green” trail in the past couple decades through a number of public and private initiatives, some even recognized far beyond our borders. Perhaps sensitivity to environmentally related topics grew early in Syracuse out of the need to clean up Onondaga Lake, once designated a SuperFund site and frequently referenced as America’s most polluted lake. When scientist Steve Effler (founder of the Upstate Freshwater Institute) was a boy growing up in the 1950’s in Syracuse, he said in an interview with NPR, “The lake [smelled] so bad [from the pollution] that you had to roll the windows up.” A victim of both “raw and partially treated sewage from the city and its suburbs, and a century's worth of industrial dumping”, the lake is once again clean enough for fishing after a billion dollar court-ordered clean-up that remains ongoing. Participants in a fishing derby cast lines from a pier near Onondaga Lake's outflow in Syracuse, N.Y. Photo Credit: David Chanatry for NPR

Much credit for care about natural resources that permeates the consciousness of the area can be given to the Onondaga Nation, one of the six member nation of the Haudenosaunee (Iroquois) Confederacy, whose ruling principle -- first handed down on the shores of Lake Onondaga --  is to look forward seven generations in making any decision. Caring for Mother Earth and the resources she provides is at its heart.

In any event, the leadership and commitment of local and state government, educational institutions, individuals and community, along with this indigenous people’s deep influence, continue to power pace-setting “green” initiatives in and around Syracuse. In fact, there are so many it is exhausting, as well as enormously impressive!

The City of Syracuse’s Sustainability Plan is a model for urban resilience planning, using the following definition of “sustainability”: “A thriving, sustainable community is a place that provides a safe, healthy, high quality of life for current and future generations, incorporating a comprehensive approach to economic vitality, social equity, and environmental stewardship.” It covers energy and green building education, food systems, natural environment, waste and recycling. Much attention has been focused on water management. The plan is notable for cooperation between the city and the surrounding county, as well as support from the state. 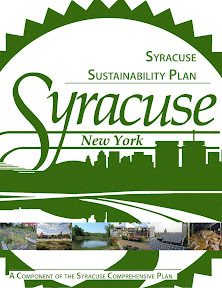 The county in which Syracuse is located, Onondaga County, works closely with the city and, since 2010, has maintained its own resilience programs, such as the Onondaga County’s Green Improvement Fund (GIF), a public-private partnership to encourage through grantmaking the adoption of stormwater mitigation practices and green infrastructure development on private and nonprofit property in Syracuse. Since its inception and with about $9 million in funding, over 80 GIF projects -- such as installation of porous pavement, new green space, rain gardens, green roofs and infiltration trenches -- have been completed and have captured over 38 million gallons of stormwater runoff.

Among a number of other partnerships and relationships, The Tech Garden (a major asset of CenterState CEO, Central New York's economic development organization) and the certified LEED Platinum facility ​Syracuse Center of Excellence for Environmental and Energy Systems (Syracuse CoE), which is located several blocks away from The Tech Garden, share resources and collaborate on programs. The Syracuse CoE is lead by Syracuse University under Executive Director Edward Bogucz, which conducts research, product development, commercialization assistance and education programs relating to “innovations that improve energy efficiency, environmental quality and resilience in healthy buildings and cleaner, greener communities.”

The Clean Tech Center, also located at The Tech Garden, serves as a clean energy incubator for development of renewable and clean energy technology companies in New York State. Funded by the New York State Energy Research and Development Center (NYSERDA) and recognized nationally as a top “clean tech cluster”, it connects entrepreneurs, investors and academic researchers, and serves as a hub for information on the cleantech sector for the State. It counts among its successes The Paper Battery Company, MicroGen Systems and Earthsense. According to the Governor’s office, as of December 2016, “141 clean technology companies have been supported and primed for further growth through the [Governor’s] Cleantech Business Incubator initiative. The initiative has attracted more than $215 million in private capital and created 980 high-quality jobs at the New York-based businesses statewide.” The Connective Corridor brings together Syracuse’s private educational citadel on the hill with the city down below, including poorer parts essentially severed from the rest by a four-lane highway, making it easier for students and residents to access activities uptown and downtown. This civic initiative, led by Syracuse University working with the City of Syracuse and Onondaga County, as well as National Grid, combines smart growth and sustainability, along with art and architecture -- much like New York City’s High Line.

Among the “green” and sustainable components employed, the Connective Corridor’s green Methacrylate bike lanes represent a novel approach to green technologies. They are a new generation resin that provides exceptional durability on asphalt and concrete, skid-resistance, and extremely high reflective values for safety. This new green bike network in Syracuse is one of the first in the country to implement new federal standards for green as a universal bike lane color. A handful of communities have simply painted over asphalt, but Syracuse is among the first to install a long-term solution. Unlike painted asphalt, which has to be re-done every few years, Methacrylate is designed to last up to 20 years.” As an example of the power of Syracuse individuals committed to sustainability (with nothing less than global impact), native Rick Fedrizzi , is co-founder and former President/CEO of the U.S. Green Building Council, which has been “transforming the way our buildings are designed, constructed and operated through LEED — the top third-party verification system for sustainable structures around the world.” In addition, Rick became chairman and CEO of the International WELL Building Institute (IWBI) in November 2016, “a public benefit corporation advancing buildings that put human health and wellness at the center of their design and operation.”

Rick’s leadership helped inspire what is currently U.S. Green Building Council New York Upstate (USGBC Upstate). Under the leadership of Tracie Hall, USGBC Upstate is dedicated to education, outreach, advocacy, and activities for members and others interested in green building in 55 counties in New York through events, articles and projects. Tracie Hall, Board Co-Chair and Director for USGBC Upstate, is an advocate and educator whose commitment “was fueled through her involvement in a project that became the first LEED® certified building in Syracuse.” usgbc.org. Photo credit: Josh Barber

USGBC Upstate has grown out of the leadership of a number of other Syracuse-based architects, engineers, designers, builders, and other professionals dedicated to designing and furthering its mission, including one of the it’s Co-founders, Kevin Stack, and is being carried forward by the next generation as well, including Kevin’s son Josh Stack. Kevin Stack, one of the Co-Founders of USGBC Upstate, is Founder and CEO of Northeast Natural Homes and Northeast Green Building Consulting, “focusing on innovation and sustainability for homes and human-built environments based on building science, biomimicry, resilience and the sciences of life.” Source. Photo credit: ESF On March 30 and 31, Syracuse welcomed the 15th Annual New York State Green Building Conference at the Marriott Syracuse Downtown, hosted by the SUNY College of Environmental Science and Forestry (SUNY ESF) (ranked No. 2 in both the Sierra Club Magazine's "Cool Schools" and Princeton Review's "Nation's Green Colleges"), in partnership with the USGBC Upstate and the Syracuse CoE).

The agenda featured state-of-the-art topics including High Performance Buildings, Building Science, Resiliency, Passive Houses, and LEED v4 (for those not in the profession, that would be the acronym for “Leadership in Energy and Environmental Design, a rating system administered by the US Green Building Council, version 4), Green Materials and Resources Urban Design.

Somehow, different Syracuse community actors in both the public and the private sectors have been able to plan and execute together for sustainability and resilience. What a model for us all throughout New York State and beyond.