That’s right. The Marriott Syracuse Downtown has perhaps the most memorable hotel doors you could ever walk through. I recently stayed there for a conference and was fascinated by them.  Affectionately known as the “coffin doors” because they have a convex shape on either side that looks like, well, the top of a coffin. The doors were not coincidentally made -- it’s true -- by the Marsellus Casket Company of Syracuse, which closed in 2003. Their shape hid some novel functions, which will be addressed below as part of the bigger story.

The grand dame Hotel Syracuse, which first opened in 1924 and is listed on the U.S. National Register of Historic Places, was designed for elegance by New York architect William Stone Post, who also designed such buildings as the New York Stock Exchange, Cornelius Vanderbilt’s Fifth Avenue home, and the Equitable Life Assurance Society on Broadway, eight-stories high and apparently the first building designed to use elevators.

After being shuttered and desperately in need of repair for over a decade, Hotel Syracuse reopened its doors in August 2016 under its new Marriott name after a loving $70 million renovation overseen by owner Ed Riley. A fourth-generation native of Syracuse, his goal was to restore the hotel as much as possible to its original elegant design. 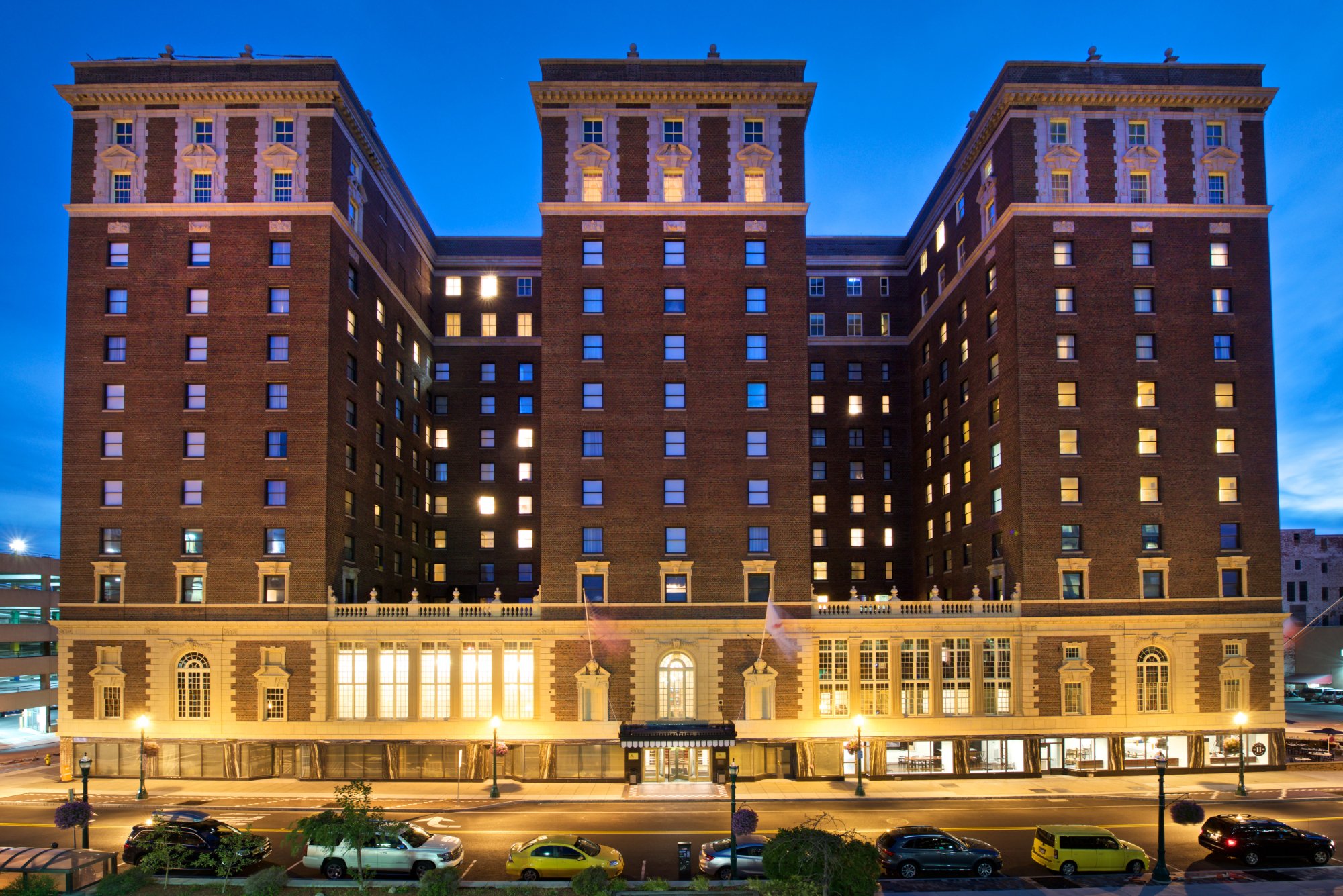 One of the most effective sustainability practices is to reuse an existing building, rather than construct a new one. Ed not only preserved the structure, but also restored and repurposed as many features as he could -- and used local sources and labor when possible. According to Neal Mednick in an article for Traditional Building, “restoration of the Hotel Syracuse involved more than 100 trades and an army of tradesmen, including artisans and craftsmen of the highest skill. A prime example is the venerable and locally based Stickley Audi & Company (formerly L. & L.G. Stickley Inc.), which made the furniture for the hotel’s opening.” Stickley also refurbished those original wood “coffin doors.”

So back to those doors! The original hotel bedroom doors had two unique features. First, on either side of the door, the convex “coffin” shape created space for garments that needed cleaning or pressing and shoes needing to be shined. The occupant would open the inside door to insert the items and remove them when attended. During the night, the hotel worker would open the outside door to retrieve them and return them fresh and polished. The second special feature of the doors was a ventilation system to allow air-conditioning in the room, if desired. Hotel Syracuse was the first hotel in Syracuse to be air-conditioned -- which makes sense given that Carrier Corporation, the air-conditioning giant, was founded in Syracuse -- however, it was only in the common spaces. The bedrooms had no separate cooling of their own.

No worries these days on that front! The rooms are now handsomely and comfortably appointed...and have their own air-conditioning and heating.

Valuable discoveries were also made during the restoration. When the mirror glass on the wall above the registration counter -- added for an unknown reason at some point during the life of the hotel -- was removed, it revealed a powerful 40-foot mural painted in 1948 by Carl Roters depicting early Syracuse life. It was carefully restored and serves as a focal point of the lobby. And other forgotten works of art were found, along with vases, silver, and other memorabilia.

The two ballrooms, the Persian Terrace and Grand Ballroom, were returned to their former glory, filled with memories of past proms and galas — and already booked through 2018 for weddings and other celebrations. It is not surprising to see guests staring up at the vast lobby ceiling, newly plastered and painted, and punctuated by large sparkling chandeliers now sporting original orange accents among their sparkling Austrian crystals. If you study it closely, you might even find a portrait of owner Ed Riley wearing a Grecian garland. We can help you know what to look for, since we found it; but we won’t give away exactly where! Check out the Marriott Syracuse Downtown on your next visit -- the new (old) place to stay, hold a conference, or get married!